NPDES is a federal permit system based in the Federal Clean Water Act (CWA). NPDES permits were initially developed to regulate sewage treatment plants and industrial discharges. While much pollution was prevented through such permits, many studies found that significant pollution is picked up in stormwater, the water that flows over the ground after it rains or snows.

In 1987, amendments to the CWA expanded the NPDES permit system to include stormwater discharges from municipalities (i.e., cities and counties), large construction sites, and many industrial sites. 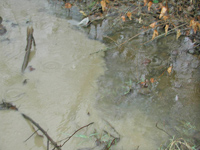