Frognal Estates, formerly known as Horseman's Trail, is a proposed single-family subdivision project for 112 lots. It is an assembly of three currently forested parcels totaling 22.34 acres in the Picnic Point neighborhood, an area between Mukilteo and Edmonds.

Because development of this site would require substantial grading and may have off-site environmental impacts, Snohomish County is requiring supplemental environmental review of the possible impacts. This review is called an Environmental Impact Statement (EIS). A Draft EIS was issued on July 23, 2014 and a Final EIS was published on September 13, 2015.

Note: The dates in the video for the hearing are the original hearing dates, not the rescheduled dates.

Watch a video on this project 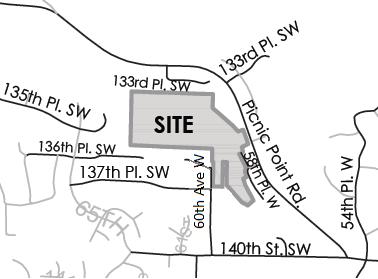