In December 2003, the King County Executive made a decision on the location for the Brightwater Treatment System. This included a wastewater treatment plant at the Route 9 site in unincorporated Snohomish County, a conveyance pipeline along Northeast 195th Street and the King/Snohomish County line, and an outfall in Puget Sound off Point Wells. Treatment plant operations began in September 2011. The conveyance system and outfall began full operations in fall 2012.

The following documents establish the relationship between King and Snohomish Counties for permitting and construction of the plant.

In accordance with the Settlement Agreement, Snohomish County is responsible for constructing community mitigation projects on the Mitigation Project List. 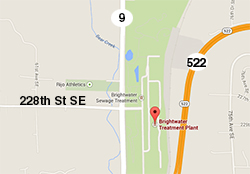