The Annual Point-in-Time (PIT) count provides a snapshot of homelessness in Snohomish County on a single night in January of each year. While it is not possible to count every homeless person, the methodology includes outreach efforts targeting known areas and general canvassing to capture the best picture possible. The count allows us to look at trends over the years by using consistent methodology. The PIT includes use of a survey tool which provides a means for gathering information directly from individuals and families experiencing homelessness about their needs and the causes of homelessness. The PIT results, along with other data and information, help inform the Everett/Snohomish County Continuum of Care plan for addressing needs and making progress toward goals to reduce, end, and prevent homelessness.

The count is conducted in conformance with Federal and State requirements. The Federal McKinney-Vento Homeless Assistance Act (as amended) authorized the U.S. Department of Housing and Urban Development (HUD) to require the PIT count of all Continuums of Care. Washington State requires an annual PIT count that follows HUD requirements authorized through the Homeless Housing and Assistance Act (ESSHB 2163, as amended) and RCW 43.185C.030. More information about HUD’s guidance for PIT counts may be found on the HUD Exchange website. 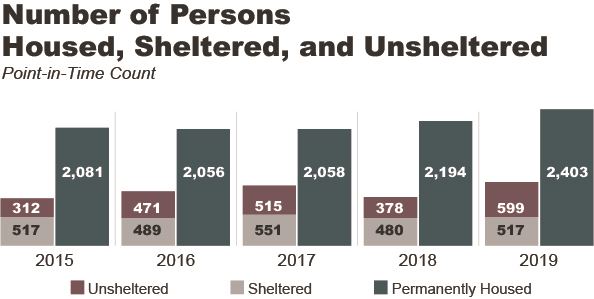 The PIT Count is conducted in the last two weeks of January each year. In the earliest years, the count included a survey interview and “tic” count methodology in which people were counted as they were seen on the streets or other unsheltered locations. It was found that the tic methodology produced unreliable data as volunteers were estimating the number of people in encampments and included people who appeared to be homeless. There was also no way to report whether an individual had been counted more than once. This methodology was therefore discontinued and the survey tool methodology, under which initials and birthdates were collected from the individuals who were counted, was continued. This change was made in conformance to HUD’s direction that the methodology used provides an unduplicated count of persons experiencing homelessness.

The 2015 HUD Standards require methods that further support reduced duplication by adding additional criteria. Locally, the decision was made to change from a single initial to the first 2 letters of the first and last name, along with middle initial and date of birth. This was a minor change from previous years but allowed the local area to demonstrate improved methodology for reporting unduplicated counts.

The count is conducted by mapping 5 separate districts in the county which clearly identify the geographic area for each district to be used by district leads and volunteers and further helps avoid duplication. Five staging areas are publicized and serve as the base of operations for the district. The trained volunteers work in teams to canvass the streets in predetermined areas to interview people. These teams target encampments, food banks, community meals locations, and other “hot spots” where people who are experiencing homeless are known to be located. Individuals who are approached for an interview have the option to decline. To encourage participation and help people with some of their needs, staging sites provided meals, sack lunches, warm clothes and other giveaways to participants.

Any PIT Count methodology used will have some inherent limitations and there are factors, such as weather, that may affect the count results in any given year. Therefore, the PIT Count results should be considered an indicator of overall trends rather than a definitive number of those experiencing homelessness at any given time.