Jim Creek Bridge is located at milepost 3.4 on Jordan Road, east of Downtown Arlington, adjacent to Snohomish County’s River Meadows Park. During the 2014 project, the old bridge was replaced with a new two-lane structure designed to updated standards.

The old concrete arch bridge was built as a two-lane structure in 1914 when vehicles were narrower. Today's larger vehicles limited the bridge to a single lane of alternating traffic controlled by a stop sign. This made the bridge functionally obsolete. Sight distances for faster moving traffic were also inadequate.

Travel along the road has improved with the construction of the new, two-lane bridge and realignment, which corrected sight distance challenges. A small portion of River Meadows County Park was converted from public park land for the project to allow for realignment of the bridge approach. The conversion was approved by the Washington State Recreation and Conservation Office (RCO). RCO funded the purchase of River Meadows County Park with a grant issued in 1969.

Replacement of Jim Creek Bridge No. 42 required 25 full closures of Jordan Road at the bridge. The closures took place during weekdays between 9 a.m. and 3 p.m. Signs were posted one week in advance of each closure as dates were identified, and subscribers to this Web page were notified in advance.

Interwest Construction, Inc. was the contractor that built the new bridge.

Final paving and striping with took place during 2014 in the late spring. 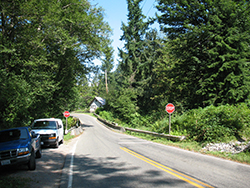 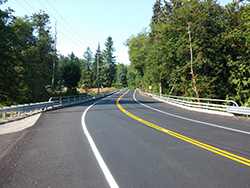 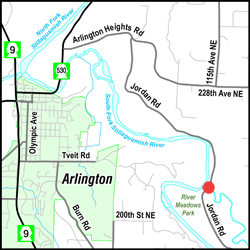